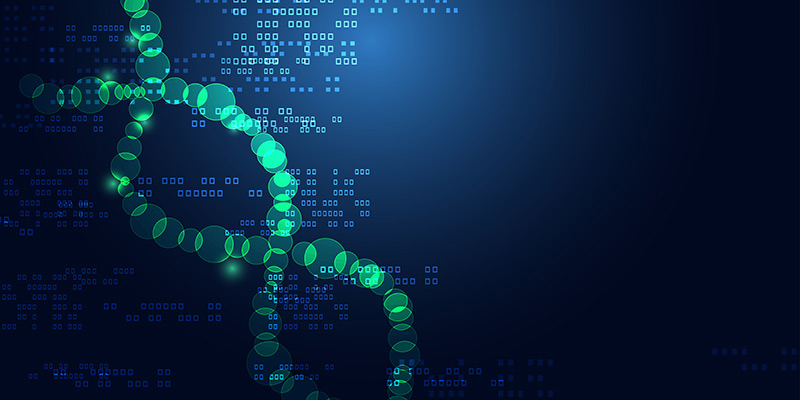 And for 44 years he got away with it.

Dubbed the Golden State Killer, he terrorized California throughout the ‘70s and ‘80s… and the police never got near him.

Until April of this year when they made a surprising breakthrough.

In short, one of DeAngelo’s distant relatives anonymously submitted DNA to GEDmatch, a family tree website.

Police obtained it and matched it to the killer’s DNA from their database. It helped prove DeAngelo was the Golden State Killer.

Nearly half a century after he first committed murder, the police finally threw him in jail.

As you read this sentence, a huge breakthrough is happening in DNA “mapping.”

Although it has escaped the notice of most investors, doctors and scientists have been waiting on this breakthrough for decades.

It’s no exaggeration to say it will save millions of lives… and bring tens of billions in profit to the company achieving it.

Let me give you some quick background.…

It aimed to “crack the code of life” by “mapping” the 3 billion DNA pairs present in humans.

Among other things, DNA determines which diseases we’re vulnerable to. Most diseases—cancer, heart disease, diabetes—stem from our DNA.

By learning the secrets hidden within your DNA, doctors can tell what diseases you’re likely to get. This allows them to catch problems earlier… and diagnose them more accurately.

According to leading scientific journal BMJ Quality & Safety, 12 million Americans are misdiagnosed every year. When it comes to a disease like cancer, an accurate and timely diagnosis can literally save your life.

On average, humans have a 90% chance of beating cancer if it’s caught early on in stage 1. But less than a 10% chance if goes undetected until later stages.

The problem was… accessing the secrets within our DNA has been prohibitively expensive.

It took scientists 13 years and $3 billion to complete the Human Genome Project.

And just 17 years ago, getting your personal DNA mapped would have set you back $100 million.

But this is all changing…

And according to leading maker of DNA mapping machines Illumina (ILMN), within a few years, it will cost only $100..

You can see the staggering plunge in cost right here: 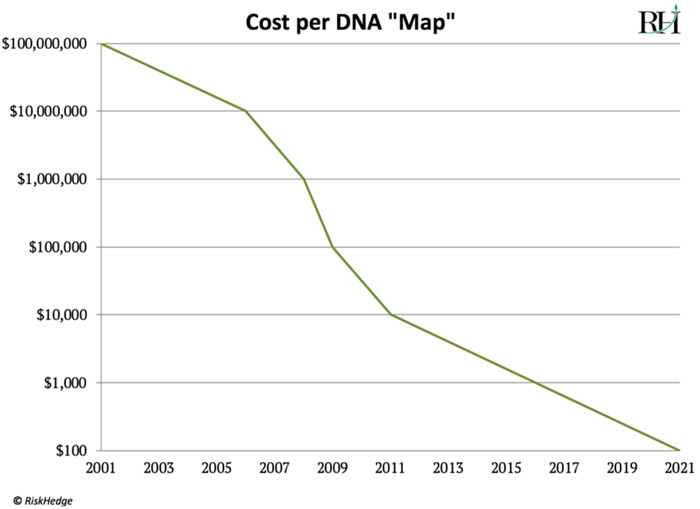 As the cost plummets, the usage of DNA mapping in healthcare is exploding.

For example, a new prenatal test based on DNA mapping can detect hard-to-find problems with babies inside a mother’s womb. It’s the fastest-growing medical test in American history.

Earlier this year, Medicare and Medicaid announced they will start reimbursing patients for DNA mapping tests.

And medical provider Geisinger Health has started including these DNA tests in its routine care.

Illumina is far and away the world leader in DNA mapping. It commands a 90% market share and dominates all competitors. In fact, Illumina’s technology has completed 9 out of every 10 DNA mappings ever done.

Illumina has flown under the radar, and most investors haven’t heard of it yet. But as DNA mapping becomes routine, it will be a household name. I expect Illumina to be synonymous with DNA testing—just as folks say “Google” for “search” today.

Illumina’s cutting-edge DNA machines are the reason the cost to map a human’s DNA has fallen below $1,000. When Illumina entered the market in 2006, it cost $10 million to map one person’s DNA. Each new Illumina machine has slashed these costs by millions of dollars… and its latest release will give us DNA mapping for $100.

Neither can compete with Illumina’s speed of innovation. And neither is a serious challenge to its dominance in DNA mapping. With 800 patents on its DNA mapping machines, Illumina has an iron grip on this market. And it recently teamed up with healthcare giant Bristol-Myers Squibb (BMY) to help introduce DNA mapping into hospitals across America.

Illumina essentially created the DNA mapping market. As you can imagine, this wasn’t cheap. It took billions of dollars and countless man hours to drive mapping costs down to a level where most Americans can benefit from them.

Despite this, Illumina has achieved record profits for 5 years running. And it’s on track to beat its record once again this year.

Illumina’s sales mix is the secret to its success. The company is best known for the DNA mapping machines it sells to hospitals and other medical professionals. These cost up to $10 million each.

But drill down and you’ll find that two-thirds of its revenue comes from a different source.

To conduct a DNA mapping, a doctor will first take a sample of your blood or saliva. Then she’ll apply chemicals to it to extract the DNA. The DNA gets inserted into one of Illumina’s machines, which essentially spits out a computer file that contains your genetic information.

The chemical part is key. These specialized chemicals are consumed with each mapping. So, hospitals and doctors must continually buy more. Illumina’s chemical sales have more than tripled in the past 5 years.

This model gives Illumina a big financial advantage. Its ongoing chemical sales allow Illumina to collect a steady stream of cash every month.

Regular RiskHedge readers know I like disruptive businesses with big, predictable cash flows. As I explained in a recent issue, I call these “Autopilot Stocks” for their ability to generate consistent profits, month after month, as if on autopilot.

Even as it drives the costs of DNA mapping into the ground… Illumina is achieving record profitability.

Illumina is truly a disruptive company that’s set to dominate an exploding industry. If it can maintain its 90% market share as I expect, its sales should triple over the next 3 years. This should send its stock soaring to double its current stock price.

Have you or a family member had a DNA mapping test done? Tell me at stephen@riskhedge.com.

“If a tree or car can interfere with a 5G signal how is it ever going to work? Also, you said it can only reach 1 kilometer. How will they achieve widespread 5G coverage when the range is so limited?

Bob, there’s no doubt the 5G rollout has some challenges ahead. But right now, network providers are developing cell towers so small they’ll sit on top of traffic lights and lamp posts. So in the not-too-distant future you can expect to see one of them every few blocks.

As for 5G’s fragile signal… the companies leading the 5G rollout are developing something called “beamforming” which will solve this problem. We’ll be talking a lot more about this in future issues of the RiskHedge Report.