A personal story… and why I’ll never bet against America

It made the hairs on the back of my neck stand up.

It’s July 2014. I’m in the StubHub Center in Carson, California.

The sun had just disappeared behind the beam, but it’s still hot as hell. And I’m standing with 9,000 other spectators watching the CrossFit Games.

Before the final heat kicks off, there’s dead silence for “The Star-Spangled Banner.”

The flag was blowing in the wind… and every American had their palm over their chest.

It sent shivers down my spine, and brought a tear to my eye.

That is… an American.

I wasn’t raised in a leafy US suburb…

I grew up in the inner-city of Dublin, Ireland. It was kind of a dank place. I remember my childhood like a black and white movie.

The best that most kids my age could hope for was to find a job on some construction site.

Getting rich? That was something that only happened to folks in faraway lands. Millionaires were works of fiction in my neighborhood.

I took my first trip to New York City when I was 17.

The skyscrapers entranced me. I’ve never been more inspired in my life than when I first laid eyes on the Empire State building.

I wanted to be one of those Wall Street hotshots. So I started learning everything there was to know about finance and investing.

I dropped out of high school a year early. But that trip to the Big Apple lit a fire under me. Fast forward a couple of years and I was working at a multibillion-dollar financial institution halfway across the world.

Wall Street is great. But honestly, corporate life sucks. That’s why our publisher Dan Steinhart and I started RiskHedge with two laptops at a coffee shop in Vermont.

Today, I’m living my dream as a professional investor. More importantly, I’m able to help thousands of readers grow their wealth with my recommendations.

And I owe it all to America.

The US is still the only country on earth where you can be whatever you want… if you’re willing to work for it.

Every time I turn on the TV or open a newspaper, “experts” are bashing the country. We’re told the US is falling apart at the seams.

These folks are just plain wrong. Having lived on four continents, I can tell you America is the most innovative, resilient place on earth.

For example, back in March the coronavirus was set to crush New York. We were staring down the barrel of a catastrophic ventilator shortage. A New York Times headline sums up America’s response best: “New York Needed Ventilators. So They Developed One in a Month.”

Or look at what American workers did when they got steamrolled by a recession and mass layoffs this year. New Commerce Department data shows folks are starting more businesses than any time in the past 16 years: 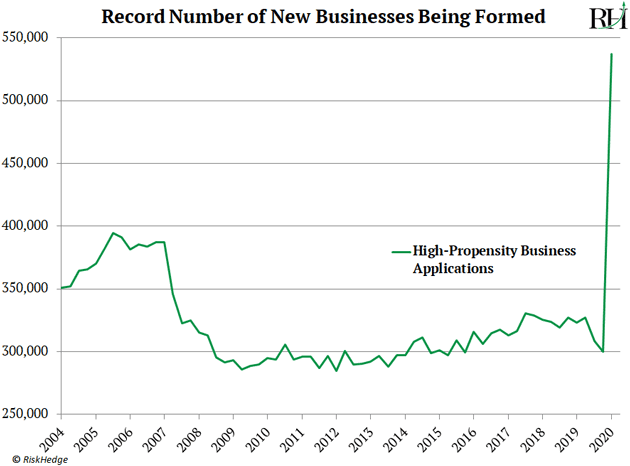 And what’s happened to a batch of American stocks.

They can’t go to campus anymore… so they’re getting their educations online. 2U (TWOU)—which runs online classes for 73 of the world’s best colleges—has doubled since March.

They can’t go to the gym… so they’re working out from home, sending connected fitness stock Peloton (PTON) up a whopping 320% this year.

They can’t open up their stores… so they’re selling stuff online on Etsy (ETSY), which has exploded 255% over the past seven months.

They can’t sell their homes the traditional way… so they’re going online and using Redfin (RDFN) and Zillow (ZW), both up 250%+ since stocks bottomed.

In other words… this pandemic couldn’t stop the most resilient nation on the planet.

It’s an amazing accomplishment… one every American should be proud of.

We’re seeing a whole new class of stocks surging 200%... 300%... even 400% in a matter of months… thanks in large part to millions of Americans’ unwillingness to give up.

The sad thing is most regular investors aren’t hearing about these huge winners. That’s because the media only focuses on the negative news.

I don’t want you to miss out on the hypergrowth boom that’s happening right now.

That’s why Justin Spittler and I founded Disruption Trader… to help regular folks take advantage of this big opportunity.

We’re focused on the small AMERICAN hypergrowth stocks that are creating entirely new industries from scratch.

We believe this is, hands down, the #1 profit opportunity in the stock market today… and the next couple of years to come.

Hundreds of RiskHedge readers have already joined Disruption Trader as Founding Members. I’d love for you to join us right here, before the enrollment window closes tonight.

Go here to review everything you get when you become a Founding Member of Disruption Trader today (closes tonight at midnight).

And if you’d prefer to trade hypergrowth stocks on your own, here’s my #1 piece of guidance:

Gravitate toward companies that are solving America’s biggest problems.

This right here is why I do what I do. Here are two new members who are already profiting from our recommendations…:

"I already covered my subscription with TWST and [ticker removed]... I love the product and thank you... Justin Spittler's a stud."
—New Disruption Trader Founding Member Gerard F.

You can join us before the midnight deadline by going here.