5G Is a Pipe Dream Without This Technology

It’s one of the biggest opportunities of the 2020s.

And hardly anyone outside of tech circles is talking about it yet.

But this won’t stay a secret for much longer. It can’t.

As you’re about to see, this ground-breaking technology makes the “impossible” possible.

Self-driving cars, the Internet of Things (IoT), and augmented reality (AR) are merely pipe dreams without it. The commercialization of 5G can’t even happen without it…

If you’re curious about disruption, this megatrend absolutely must be on your radar. Early investors stand to make a fortune off it.

And cloud computing is one of the most important technological breakthroughs of the last 15 years.

It’s made it possible for everyday people and businesses to access the mega computing power of centralized servers through the internet—anytime and anywhere.

Investors are also huge fans of cloud computing. It’s easily been one of the hottest sectors of the last few years...

Now, most folks think of Amazon as an online shopping stock. But its most profitable segment is its cloud business “Amazon Web Services (AWS).” Since Amazon made AWS available to the public in March 2006, its stock has surged 60X! 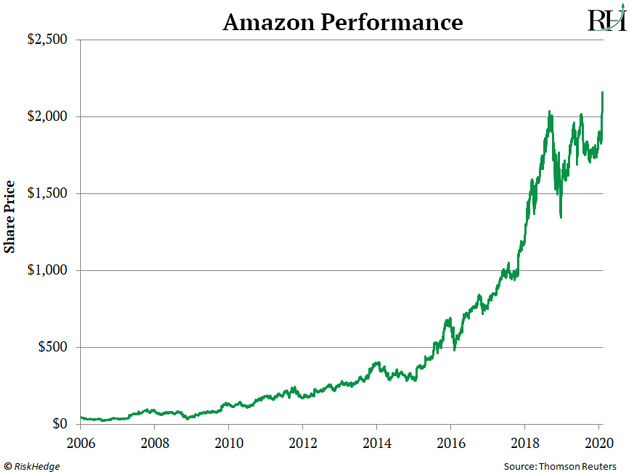 Salesforce (CRM)—a cloud computing pioneer—has soared more than 4,300% since it went public in 2004. 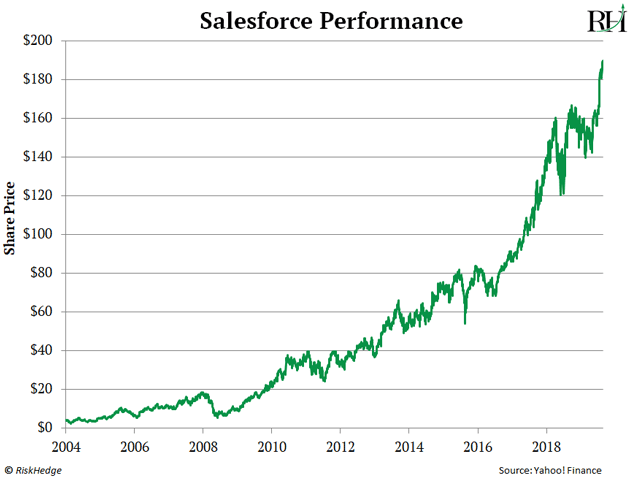 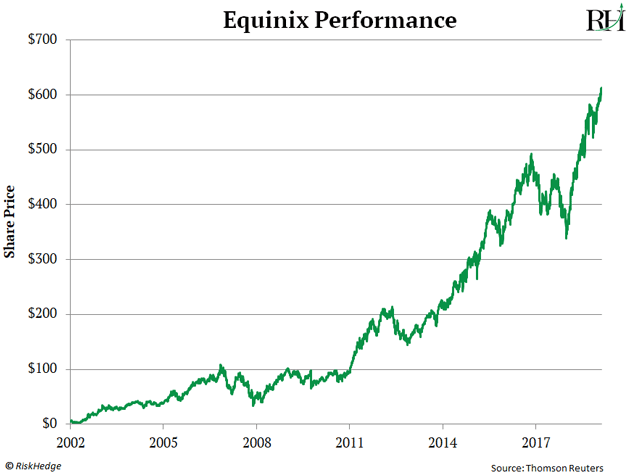 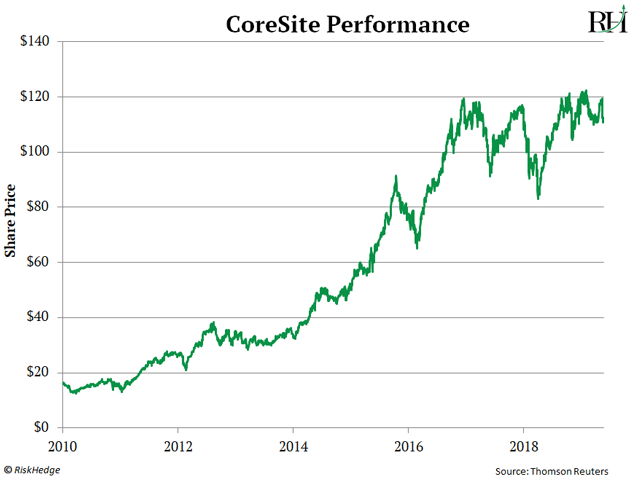 These are staggering returns. And keep in mind, the investors who pocketed the biggest gains were those who saw the potential of cloud computing BEFORE it became a well-known “buzz word.”

I don’t say this lightly…

I also believe that cloud computing and edge computing will coexist. But make no mistake. Edge computing offers far more upside than cloud at this point…

Cloud computing is hard for many people to wrap their heads around. Unlike many businesses, you can’t set foot inside a cloud computing store. You don’t physically consume its service or product. And you can’t really “see” the cloud.

This is the inside of a data center. Facilities like this power the cloud: 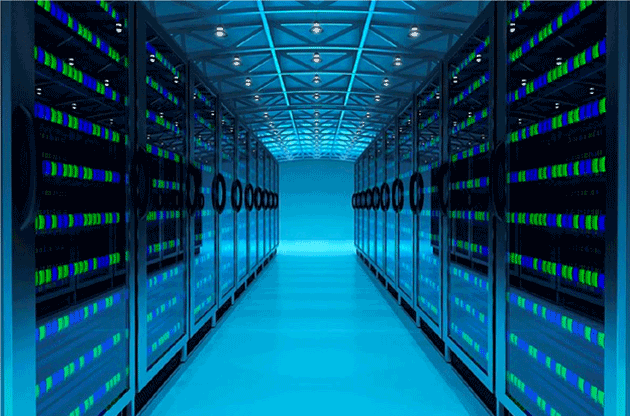 When you listen to music on Spotify, the data is processed in a facility like this. The same is true if you use Slack (WORK) to chat with your co-workers at the office. In short, most data these days is processed by these massively powerful server farms we commonly call “the cloud.”

Edge computing will look much, much different. It’s all about processing data at the “edge of the network.” The “edge” refers to devices like your smartphone, Fitbit, or smart thermostat.

If you’ve heard about the “Internet of Things” (IoT), you know the number of devices connected to the internet is set to skyrocket. These days, everything from air conditioners to coffee makers to “smart” lightbulbs can go online. According to Statista, more than 75 billion IoT devices will be online by 2025. That would represent a three-fold spike from today!

This will cause data usage to skyrocket. According to the CEO of Intel, humans and machines will create 10 times more data in five years.

But only about half that data will make it back to the cloud. The rest will be stored and processed in the devices themselves. This, in a nutshell, is what edge computing is all about.

See, sending data to a faraway data center can take up to 150 milliseconds. That’s fast... but in many cases, it’s not fast enough.

Take self-driving cars. They must make lightning-fast decisions. Milliseconds can mean the difference between life and death. If a child runs across the street, the vehicle can’t risk even the slightest delay caused by sending information to the cloud for it to be processed.

Same goes for a doctor using AR to perform remote surgery. Even the slightest delay is unacceptable.

Edge computing is the answer. It cuts down process time 5 or even 10 milliseconds. It can increase speeds by 30X!

This is all a bit technical. But it goes back to what I said earlier. Edge computing makes the impossible possible. Highly anticipated technologies like 5G and self-driving cars can’t flourish without it.

Many of the world’s brightest technology minds agree. Marcus Bergström, CEO of Ericsson’s Unified Delivery Network, says edge computing “is opening up a new tier to global internet infrastructure that has been inaccessible up until now.” The CEO of EdgeMicro, Mike Hagan, says, “The edge will lead to the third wave of the internet.”

This is great for savvy investors like us. It means we have an opportunity to invest in edge long before word gets out about it.

We’re in the early innings… We may still be singing the national anthem.

According to Grand View Research, the edge computing market is poised to grow 54% per year. By 2025, it will be worth nearly $29 billion. 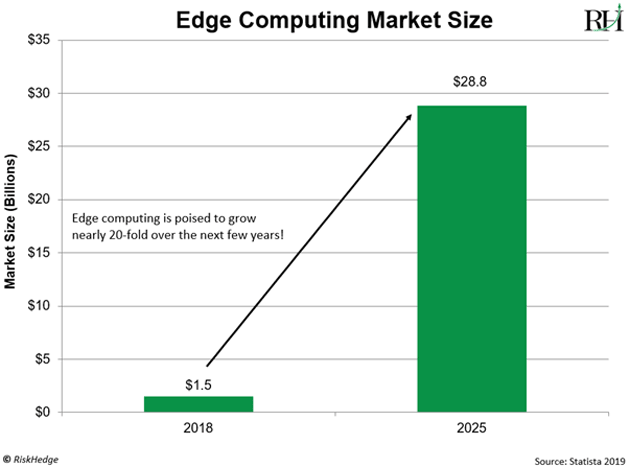 And that’s only the beginning. By 2030, Arpit Joshipura, general manager for networking at The Linux Foundation, thinks “the edge market will be four times bigger than the cloud market.”

It’s only a matter of time before “edge” becomes a household term like 5G and cloud computing.

Buying the right edge computing stocks today could be like buying Salesforce in 2004 ahead of its 4,000%+ gain.

In my advisory IPO Insider, I recently recommended my top edge computing stock for 2020 and beyond. This little-known company quietly went public a few months back. But it’s rapidly establishing itself as the force to be reckoned with in edge computing. It’s easily the best edge computing “pure play” out there.

I see this stock following in the footsteps of cloud computing greats like Salesforce, Alteryx, and Equinix—all of which posted 800%+ gains after IPO’ing.

You can learn how to access this pick—and learn about the proprietary system I used to pinpoint this IPO—by watching this special presentation my team and I put together.