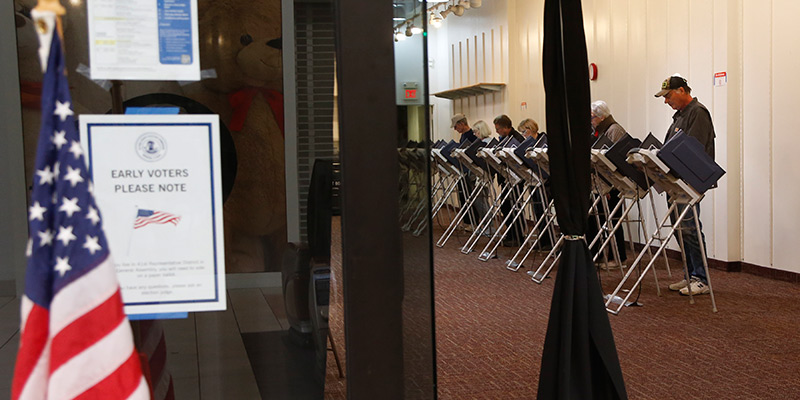 Should You Sell Your Stocks Before Tuesday’s Big Elections?

Are you prepared for Tuesday?

It’s going to be a crucial day for the stock market.

If the polls are correct, President Trump and Republicans are in big trouble…

According to statistical analysis firm FiveThirtyEight, there’s an 85% chance Democrats will seize control of the House of Representatives from Republicans.

No matter what you think of Trump, his reign as president has been great for stocks. But as the election has drawn closer, the market has fallen apart.

Yesterday the S&P 500 closed out October for a 7% monthly drop—nearly its worst month since the financial crisis!

But before I continue, a warning…

Few topics stir emotion in America like politics. Many perfectly reasonable people lose the ability to think straight when they hear the name “Trump.”

So let’s steer clear of opinion and emotion. Instead, I want to focus solely on the facts that are relevant to you as an investor.

As you’ll see, you don’t need to waste even one second worrying about which party will win on Tuesday.

I was surprised by what we found.

It turns out there’s a shockingly easy way to predict whether stocks will rise or fall after a midterm election. And it has nothing to do with predicting in advance which party will win.

Here’s what we found…

US stocks have climbed higher in the next 12 months after every single one.

I’ll repeat it because this is so important:

For each of the past 18 midterms, stocks have ALWAYS climbed higher a year later.

The market climbed higher every time.

Since 1946, stocks have jumped an average of 17% in the year after a midterm.

And if you measure from the yearly midterm lows, the results are even better. From their lows, stocks jumped an average of 32% over the next 12 months.

For perspective, that’s more than double the average performance for stocks in all years.

We’re also entering the third year of a presidential term, which is historically the strongest year for stocks.

Take a look at this chart. You can see that the performance of stocks in the third year of a presidential term beats all other years by a long shot: 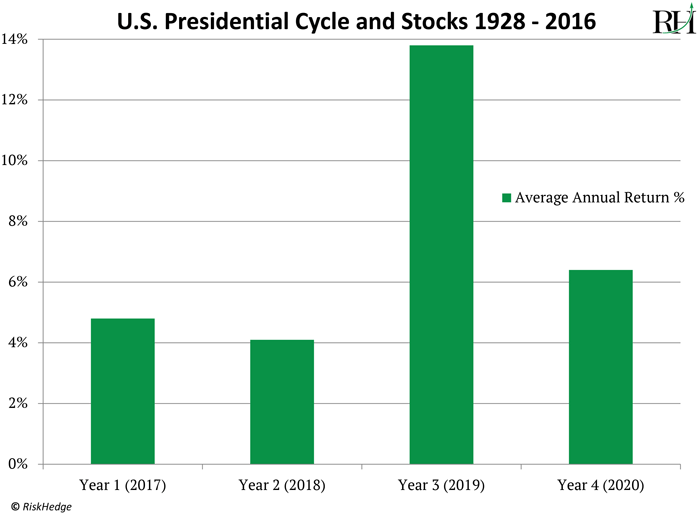 Glance up at the chart above once more and you’ll notice the second year of the presidential cycle is typically the worst for stocks.

There’s one last important point you should know. Leading up to midterms, US stocks typically perform poorly. From January to October in midterm years, they drop an average of roughly 1%.

In all other years stocks rise roughly 7% in that timeframe.

Think of midterm elections like a thick fog covering markets. They obscure what the political situation will look like in the near future.

Unable to see what’s coming, investors get nervous and act cautiously. Just as they would slow down while driving a car through a thick fog.

Once the election concludes and the fog clears, investors regain confidence and the market gets back on track.

2018 is following this script to a T. For all the market’s gyrations in the past few weeks, the S&P is roughly flat year to date. If we stay on script, we should expect the market to surge in November after the uncertainty of the elections is behind us.

If you’ve been reading the RiskHedge Report, you know I practice “disruption investing.” I identify and invest in companies that are disrupting industries and inventing the future. Often, these stocks can hand us big gains of 3x, 4x, 5x our money or more.

This stock market pullback is our chance to get in on great disruptive businesses at much cheaper prices than we could a few weeks ago.

Today I want to highlight your opportunity to buy Google (GOOG) at a great price. I’ve called Google one of the “ultimate disruptors,” because it’s like an octopus with tentacles in many disruptive sectors.

As you surely know, Google has an effective monopoly on the internet search market. For every 100 searches performed, 92 of them flow through Google. And this year it’ll earn over $100 billion from selling internet ads on its search pages.

But this is only scratching the surface. Google also owns YouTube, which my research shows could be a $150 billion company on its own.

It also owns Waymo, the world’s leading self-driving car company. As I explained recently, it will launch a fully driverless ride-sharing service in Arizona later this year.

Underneath it all, Google is super-profitable. In the latest quarter it increased its net profit margin to 27.2%. Meaning for every $100 in sales, it can reinvest $27 into growing its disruptive businesses.

A few weeks ago, I recommended you wait to buy Google until it pulled back to near $1,050/share. Today we have our chance. As I type it’s trading for about $1,070/share – close enough for me to pull the trigger.

I’m buying Google here and I plan to hold for at least two years.

That’s all for today. What do you think… Are you worried about the stock market pullback? Or do you see it as an opportunity? Write me at stephen@riskhedge.com.

Stephen, on your recent post If I Could Only Buy One Stock for the Next 5 Years, I found your arguments really strong. I did some research and bought the stock at $207. But now I see that the stock has high volatility. And the news about the chip sector going down is also a bit scary to me. I wanted to invest for the long term in NVIDIA but I am considering it a high risk stock right now.

My question is what do you think now about investing in NVIDIA after these past couple of days?

Lorenzo, thanks for writing in. The recent market selloff has hit chip stocks hard. The VanEck Semiconductor ETF (SMH), which measures the performance of chip stocks, slipped 11% in October.

As I mentioned in last week’s reader mailbag, despite the drop in Nvidia’s share price, its business has never been stronger. I reiterated buying it at last Thursday’s price of $195. Today, it’s trading at $215, and I’m still buying.

Like many top-performing stocks, NVDA can be volatile. It’s not unusual for a stock that has climbed 200% in the past two years, as NVDA has, to give back a chunk of its gains in a broader market swoon. NVDA has incredible long-term disruptive potential. I expect today’s volatility to look like little more than a bump in the rearview mirror as it climbs much higher in the next three to five years.

GET OUR TOP INVESTMENT IDEAS
EVERY WEEK

Please check your email. We sent you a note to confirm your email address. You must click the link in it to complete your activation.

Don’t blindly buy the dip in stocks. Do this instead.
Stephen’s #1 tip to play this whipsaw market
What I got wrong about 2021’s biggest story