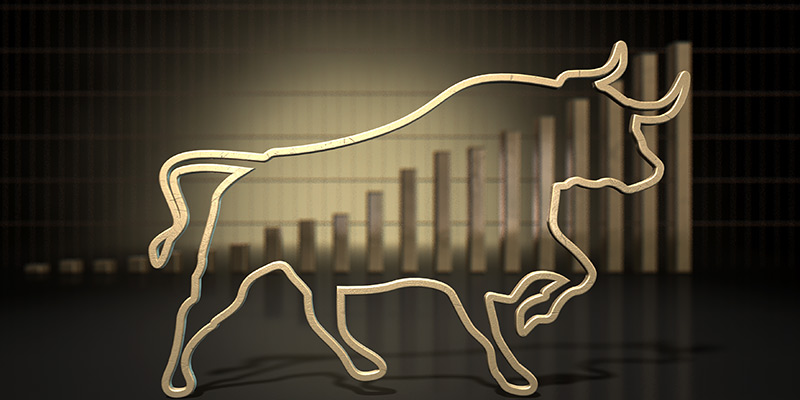 Oldest Bull Market Ever? Disruption Investors Should Do This Next

This is now the longest bull market in US stocks ever.

As of yesterday’s close, we’ve been in a bull market for 3,453 straight days.

Which breaks the all-time record formerly held by the 1990–2000 rally.

As I’m sure you remember, that one ended with a historic 80% crash in the Nasdaq that wiped out millions of overeager investors.

I’m going to give you my blueprint for investing in today’s uncharted waters.

But first… have you been following The Trade Desk (TTD)?

I alerted you to this opportunity in late June. The Trade Desk is a small online advertising company that’s stealing big chunks of business from Facebook (FB) and Google (GOOG).

It just closed a phenomenal quarter, reporting a 54% jump in revenue that sent its stock leaping 37% in one day. 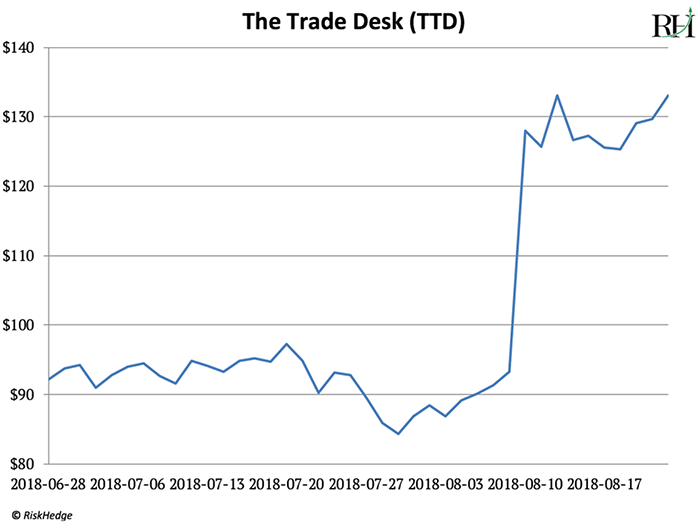 Recall that the online ad industry is an $80-billion-a-year pot of gold. Facebook and Google grew from nothing into two of the most powerful companies on earth by dominating it.

But advertisers are fed up with Facebook and Google’s lack of transparency. You can’t track the performance of individual ads on either platform. This leaves advertisers in the dark about what worked and what didn’t.

The Trade Desk has stepped up to offer a better way, and advertisers are loving it. On the latest earnings call, CEO Jeff Green said spending by the world’s 50 largest advertisers on TTD’s platform soared almost 100% in the past year.

Even better, TTD’s customer retention is world-class. Nineteen out of 20 companies that try it stick with it.

TTD has shot up 188% year-to-date, so I wouldn’t be surprised if it takes a breather soon. But I expect it to soar much higher in the next 2–3 years as it takes more and more revenue from Facebook and Google.

The media is having a field day with “The Longest Bull Market Ever” narrative. It’s front-page news on CNBC, CNN, MSNBC, WSJ, Fox, and every other big American network.

There are dozens of ways to measure a bull market, but let’s play along with the “official” definition, which states that a bull market continues until it is killed by a 20% decline. The S&P 500 hasn’t declined 20% since bottoming in March 2009, roughly 9 ½ years ago.

But here’s something you may not know. In 2011, around the time of the “debt ceiling” crisis, the S&P declined 19.4%. If it had dipped another 0.6%, the bull market would’ve ended there and we wouldn’t be having this conversation.

“We’re now in the longest bull market ever” sounds important. And it is factually accurate. This makes it perfect to fill airtime for TV networks.

But it is totally irrelevant to making money in the markets.

And you’ve surely heard the claim that, because we’ve never seen a bull market this long before, we’re “due” for a scary bear market that’s right around the corner.

Please don’t listen to this nonsense.

There is zero evidence to support it, and taking it seriously will cost you money. I’ve watched several people in my life sit out the whole bull market since 2009 thanks to scary-sounding but meaningless stories just like this. They’ve missed out on dozens of profitable opportunities because they’re always too nervous to invest.

One of the great investing lessons I’ve learned is there’s always something to be scared of in markets. It’s a false alarm 99.9% of the time. The overwhelming odds are that the “longest bull market ever” will merely be the latest entry on a long list of things that were supposed to topple the market but never did.

Off the top of my head, this list includes:

Yet here we are. US markets touched all-time highs this week. 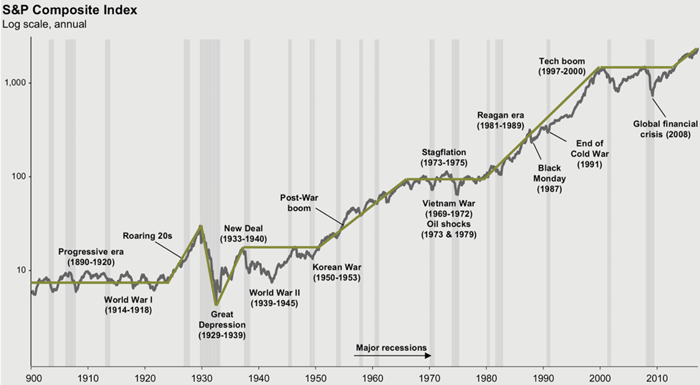 A heck of a lot of disruptive events have happened since 1900. Two world wars and dozens of smaller ones. The Great Depression, the 2008 financial crisis, and 18 recessions.

Do you want to bet with the 118-year trend, or against it?

Look, things go horribly wrong in markets from time to time. You must avoid getting caught up in dangerous bubbles like the Nasdaq in 1999 or Japanese stocks in 1989.

But the US stock market is nowhere near a bubble today. Despite what you hear, stocks aren’t even all that expensive. The S&P trades for about 16.5x forward earnings, which is right in line with its 25-year average.

So be smart. Be cautious. Practice proper position sizing and risk management. But don’t obsess over when the next bear market will hit.

For most of the last 118 years US stocks have gone up. Meanwhile great disruptive businesses like Apple (AAPL) and Microsoft (MSFT) and Google (GOOG) and literally hundreds of others have handed investors 10x gains over and over and over again.

With profitable opportunities like this all around us today, it’s illogical to obsess about the tiny slivers in the chart above when stocks go down. The average bear market lasts 10 months and stocks drop 32%. Meanwhile, a great disruptive stock like The Trade Desk can hand us a profit of 37% in a single day, as I showed you earlier.

Are you a stock market bear who hated this issue? Direct your anger to stephen@riskhedge.com.

I am very intrigued about your short write-up on TTD. It is hard for me to believe a small company could compete with those two giants and survive. I also like your story on ASML, now that looks like a fantastic company to invest in.

Thanks Ronald. ASML makes the machines that make next generation computer chips. It recently closed its best quarter ever, with net profit surging 75% since last year. I’m still a buyer at today’s prices.

In response to my article about coal and uranium, (former) RiskHedge subscriber Maureen wrote:

This is awful. I am shocked that you and your company only care about making money. Don’t you have ANY idea what coal does to our planet???? And you’re touting the “benefits” of coal AND uranium?? Please never send me any of this bullsh*t again.

Maureen… this is an investing letter. If you had read my whole essay, you would have known I wasn’t touting coal. Coal is dirty and is being phased out, but it’ll take decades until it is totally replaced. That’s a fact, whether we like it or not.

What are your thoughts on using cryptocurrencies as a store of value? Will they replace gold as the go-to non-government currency?

My colleague Olivier Garret recently wrote a thoughtful article about this. Go here to read it.

That’s all for today. Talk to you next week.