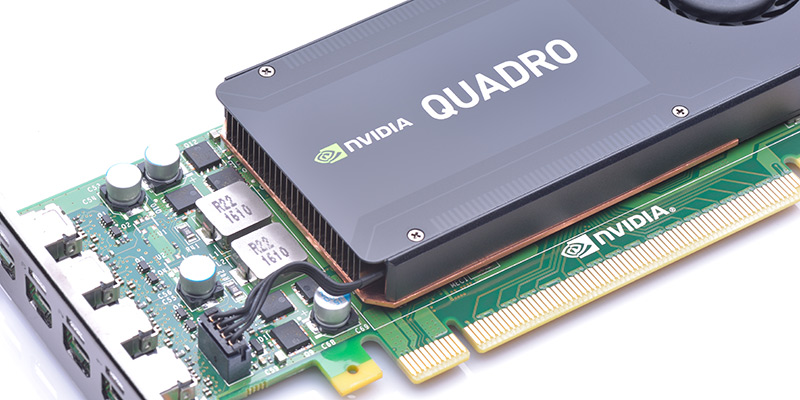 If I could only buy one stock for the next 5 years… this would be it.

If you’ve been reading the RiskHedge Report, you know about the disruptive megatrends that are powering stocks to huge gains.

That the world’s most powerful companies including Apple (AAPL), Amazon (AMZN), and Google (GOOG) are pouring billions into artificial intelligence…

And last week, I explained how video gaming has exploded into a $138 billion monster market.

This company is Nvidia (NVDA). 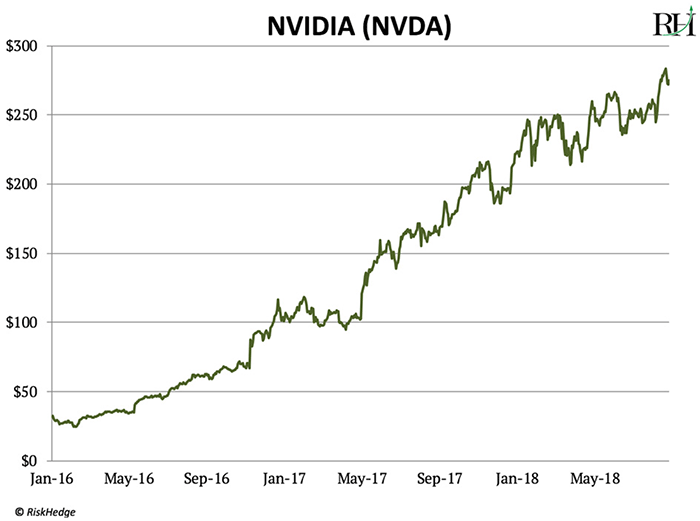 Now I know you might be thinking: Stephen, this stock has already had a heck of a run… why buy it now?

I understand the concern. But when investing in truly disruptive companies, this way of thinking is often a mistake.

NVDA developed the first mass-market GPU in 1999. GPUs use what’s called “parallel processing,” which allows the chips to perform millions of calculations at the same time.

That’s different from how other computer chips work. Most computer chips, like the one powering the laptop or phone you’re reading this on, calculate one by one.

At first, GPUs were mostly used to create realistic graphics in video games. Remember the blocky Nintendo graphics from the early ‘90s? The ability of GPUs to process huge amounts of data all at once helped create the movie-like video game graphics you see today.

In other words, artificial intelligence (AI).

In reality, AI isn’t that glamorous. It all comes down to processing massive amounts of data.

Show a computer millions of pictures of a stop sign, for example, and it will learn to recognize stop signs on its own in the real world.

AI is the driving force behind Google’s self-driving car subsidiary Waymo. As we talked about a few weeks ago, Waymo’s robot cars are cruising around American roads right now.

At the core of Waymo’s self-driving car fleet is a centralized “brain.” It has learned to recognize stop signs, pedestrian crossings, red lights, and all the other obstacles human drivers navigate.

The faster a computer can process data, the faster it can “learn” by recognizing patterns in the data.

This is why more than 2,000 companies including Amazon, Google and Microsoft use NVDA’s hardware to “train” their AI programs.

Last quarter, the revenue NVDA earned from selling AI chips and hardware jumped 82%. In the last two years, AI-related sales have accounted for over 70% of the surge in NVDA’s revenue. AI sales now make up 24% of its total revenue.

As I mentioned, it supplies self-driving car companies with chips that “train” cars’ brains. It also sells hardware that processes data from the cars’ many cameras and sensors.

For example, NVDA’s self-driving supercomputer, named Pegasus, can tackle 320 trillion operations per second. And it does so using one-third the electricity at just one-fifth the cost of its closest competitor.

Over 370 companies working on self-driving cars now use NVDA’s products. Auto sales make up just 5% of NVDA’s total revenue today; I see this exploding higher over the next few years as true self-driving cars roll out.

I mentioned earlier that $100 billion has been spent on developing self-driving cars so far. With the likes of Google and Apple pouring billions into driverless projects, I see that jumping to $1 trillion over the next 2–3 years.

Thanks to its superior technology, I expect NVDA to capture a large chunk of this.

But please understand, it’s nothing like many of the profitless tech darlings out there.

While many high-flying tech stocks get by on stories and hype, NVDA is extremely profitable.

NVDA’s high margins allow it to continually pour cash into Research & Development (R&D). It reinvests close to 20% of its revenue into R&D every year, which is a key reason why it has blown away its rivals.

NVDA is financially sound, too. It’s sitting on a record $7.95 billion in cash. Which is enough to pay off its total debt four times over.

Can buying a stock at such a high valuation be risky? Sure. But I believe NVDA’s deserves its rich valuation.

NVDA’s earnings are growing at almost six times the rate of the S&P 500. Yet its P/E ratio is not even double the S&P’s.

I think investing in a company like Ford (F), with a P/E of 5, is far riskier than buying NVDA. I can hear the groans coming from the value investors out there. But the fact is, NVDA is leading the self-driving revolution… while Ford is going to get crushed by it.

Because it is powering today’s most disruptive trends, I see NVDA doubling over the next two years. I’m buying it today at $272.

Are you buying NVDA here? Tell me at stephen@riskhedge.com

I’m a 69-year-old retired man who has worked his whole life in a semi-government job. My wife and I live on a pension, and have about $120,000 as a nest egg.

I’ve been invested in precious metals ETFs for about five years now. These have been losing investments – I’m down about 22%. I think we have to change our strategy. From reading your letter, it seems like investing in risky investments, like technology stocks, could be more prudent and profitable. I’m eager to hear your opinion.

Riekele, it sounds like you put a lot of your investable assets in precious metals. No matter how promising an investment seems, you should always spread your bets so you're not overinvested in any one stock or sector. Disruptive stocks can make us big gains in short periods, but they're also prone to big swings. Keep your position sizes manageable so you can hang on through the inevitable volatility.