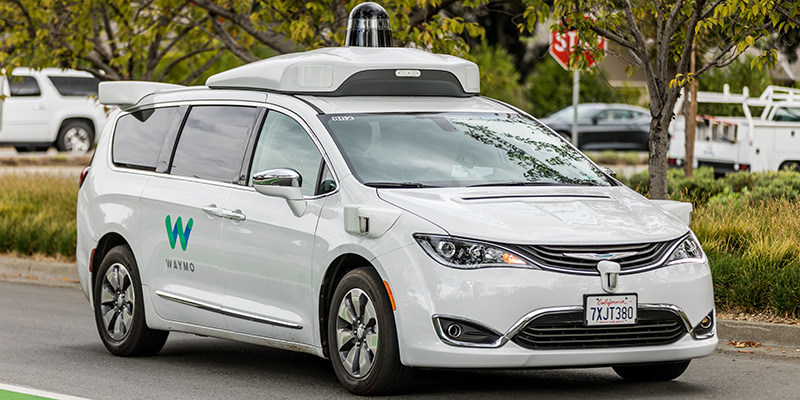 The End of the Steering Wheel

Do you know what the biggest car company in America is today?

And it sure as hell isn’t Ford (F), whose stock is crumbling to seven-year lows as you read this: 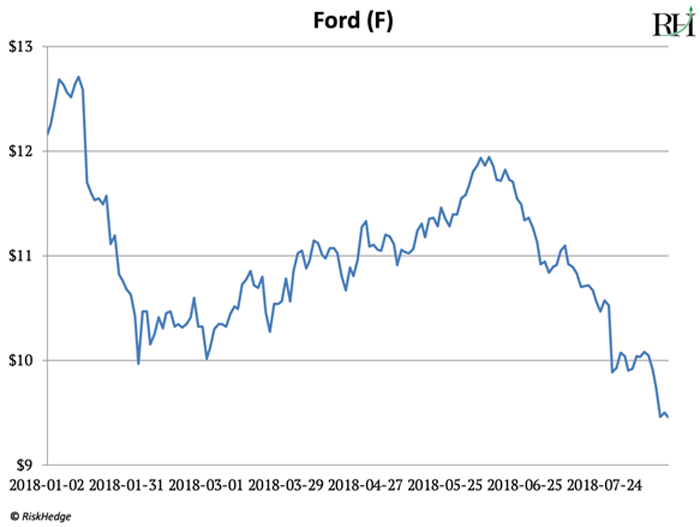 Electric-car maker Tesla (TSLA) has zoomed past both of these stumbling giants to become America’s most valuable car company.

But Tesla has barely sold any cars. Its colossal $60 billion valuation is based purely on hope and potential.

Flip on CNBC and there’s a good chance they’re talking about Tesla right now. The financial media is obsessed with founder Elon Musk.

Now picture this headline broadcast all over TV and the internet:

Can you imagine the hysteria that would erupt if fully functional, self-driving Teslas were rolled out? The stock would go bananas.

Well, this headline is accurate, except for the Tesla part.

Right now—in August 2018—self-driving cars are driving around Arizona. On the Thursday you receive this letter, a self-driving car will drive a kid to soccer practice.

And before yearend, the company that operates these cars will launch a self-driving rideshare service to the public in Arizona. It’ll operate just like Uber. You press a button on your phone and a robot taxi comes to pick you up.

There will be no driver in the car. It will be driving itself.

The company achieving all this is called Waymo. As I explained in June , it’s a subsidiary of Alphabet (formerly known as Google).

If Waymo were a standalone company, it would be the hottest stock on Wall Street. But because its tucked away inside the world’s third-biggest publicly traded company, the financial media ignores it.

Waymo’s driverless fleet has already covered 8 million miles and continues to amass 1 million miles per month today. As you can see in the chart below, Waymo has been testing driverless cars since 2009. This year, its progress has gone parabolic: 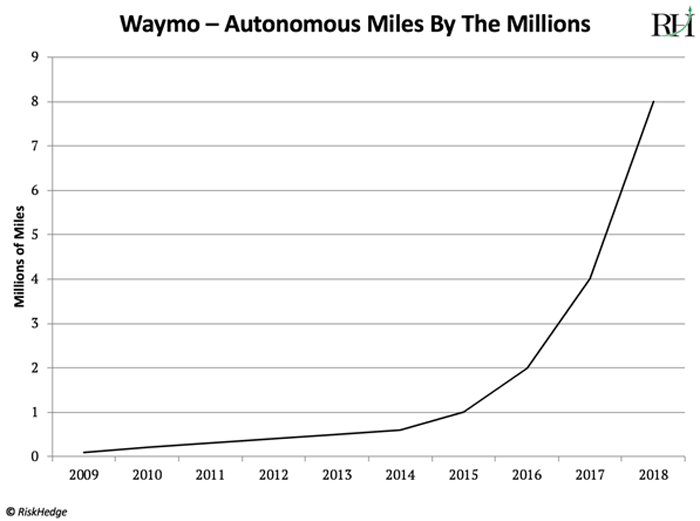 This is key because Waymo cars run on a centralized computer “brain” that learns from every mile driven.

Waymo is absolutely dominating all rivals in self-driving technology. Tesla, Uber, and many others are years behind it.

I’ve focused a lot of my time and research lately on understanding how self-driving cars will change the world. I’m convinced they’re going to hollow out the car-ownership culture in America and elsewhere.

Think back to when ridesharing services like Uber and Lyft were new. Many experts predicted these services would kill car ownership. That didn’t happen, mostly because of the cost.

Right now I’m living in Dublin, Ireland, and I don’t own a car. When I’m going for meetings, I take several Ubers a day, and the cost often adds up to over $75 a week. When I was living in Auckland, New Zealand, a far more sprawling city, the cost ballooned even higher.

By far the biggest cost of operating any car today is paying the driver. Last year, Uber took in $37 billion in fares. $30 billion—or 81%—went to the drivers. Self-driving cars slash this to zero.

A recent estimate from investment bank UBS arrived at a similar number. It suggests driverless ride-sharing services will be 70% cheaper than Uber.

That’s right in line with what my research shows—after factoring in regulatory costs, which will likely be substantial. Governments will surely wet their beaks by imposing taxes, fees, and regulations. For our own safety, of course.

Why pay for car loans, insurance, registration, inspections, repairs, parking, oil, and gas when you can summon a safe, inexpensive driverless car to pick you up anytime you want?

According to the US Census Bureau, 63% of Americans live in urban areas. I think it’s safe to assume at least half the folks who own cars in cities today will ditch them in the coming years.

Did you know that 2017 marked the first year auto sales fell since the financial crisis? I think it’s the beginning of the end of the American car industry as we know it.

Plunging car sales are obviously terrible for automaker stocks. But the disruptive effect of self-driving cars will ripple out to other, less obvious corners of the market.

The auto industry is responsible for 4% of US GDP and millions of jobs. In fact, “truck driver” is the most common job in America. Self-driving vehicles put all 4 million American truck-driving jobs in jeopardy.

Its easy to see how this could go bad politically. I can already see the headlines in the Huffington Post: “Greedy Tech Giant Google Puts Profits Before Workers…”

Waymo has smartly gotten out ahead of this by building partnerships that enhance its image. For example, it has partnered with the City Council in Phoenix to provide cheap bus and rail connections to underserved communities and the elderly. It has entered a similar partnership to drive folks to and from Walmart to buy groceries.

This is a genius move by Waymo. Instead of a job killer, it will be seen as the friendly service that takes Grandma to Walmart.

At 52 times earnings, Alphabet (Google) is too expensive for us to buy today.

I expect Waymo to achieve rocket ship growth. But Google is a colossal company worth $865 billion.

Analysts at Morgan Stanley value Waymo at $175 billion today. That sounds way too generous to me. My calculations show Waymo is worth around $100 billion. But even if we play along with Morgan Stanley’s big number, Waymo makes up only 20% of Google’s value.

I’d consider buying Google if it dips about 15% to around $1,050/share. This would push its valuation down into a more reasonable range. And it would shrink Google’s market cap enough so big growth in Waymo can move the needle.

And just as important, avoid being caught on the wrong side of it.

I’m working a “blacklist” of auto stocks in danger of getting demolished by the self-driving car trend. I’ll share it with you soon.

For now, I can tell you these three sitting ducks will definitely be on the “DO NOT BUY” list:

That’s it for today. Next Thursday, we debut the mailbag. If there’s anything you want to ask about self-driving cars, send me a note at stephen@riskhedge.com.

Get rid of your “prejudice” and buy these stocks
Have you heard of LEO stocks?
Markets are about to hit a brick wall