“Druck” the bloodhound is buying disruptors. Are you?

“Druck,” if you don’t know him, might be the greatest investor alive today.

He’s low-key and rarely gives interviews. But his track record is astonishing…

During that time he earned returns of 30% per year.

And Druck has never had a losing year… ever!

He made money in 2001 during the dot-com crash. And reportedly made $260 million in 2008, while most investors were losing their shirts.

“We are long the disruptors and short the disrupted… it has worked beautifully.”

Disruptors are not ordinary stocks. They don’t come in and compete with industry leaders. They destroy them.

They steamroll the competition… and often hand investors big gains of 3x, 4x, 5x, or better.

Believe it or not, Xerox was once a mighty tech giant. 30 years ago it was America’s 20th largest company.

Today its stock chart is a sad reminder of what it’s like to get steamrolled by a disruptor. 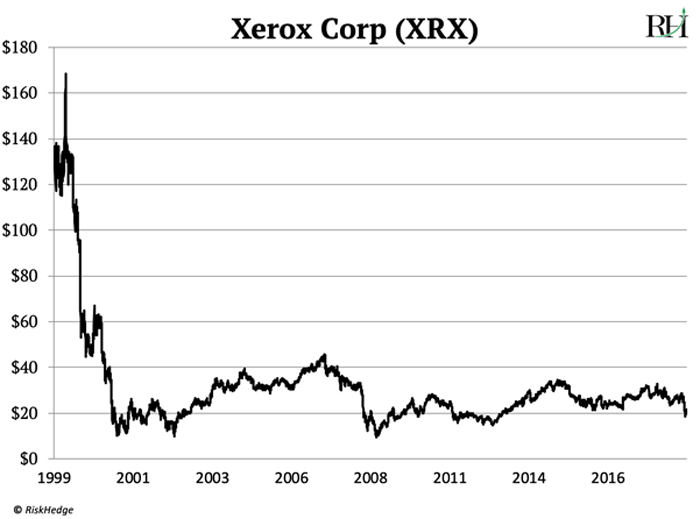 Canon (CAJ), one of the world’s biggest manufacturers of printers, is a victim of Adobe’s disruption too. In the past decade printer sales have plunged 30%, and Canon’s stock has been cut in half since 2007.

As I explained recently, the cloud gives businesses cheap access to powerful supercomputers.

Druckenmiller has invested over $1 billion in cloud businesses including Microsoft (MSFT)… Amazon (AMZN)… and ServiceNow (NOW).

In fact according to SEC filings, 52% of his stock holdings are in cloud companies.

In the chart below, you can see how cloud disruptors have crushed the S&P 500 over the last five years. 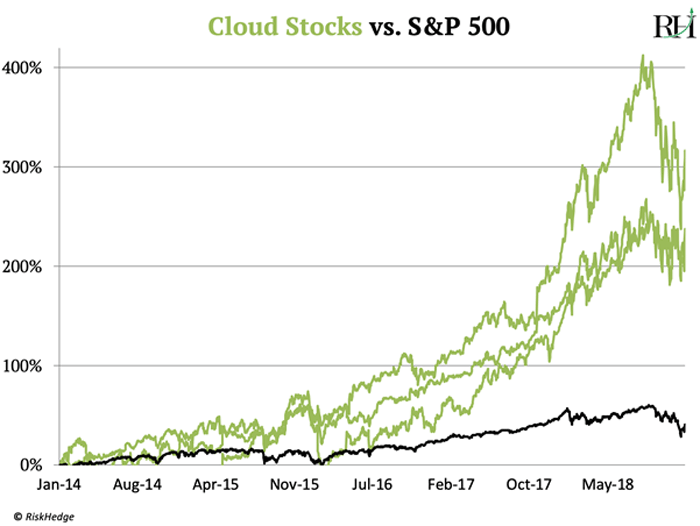 Have you seen the movie The Big Short?

It tells the story of a few investors who made a killing by betting on the US housing collapse in 2007-8.

Steve Eisman, who was played by Steve Carrell, was a mastermind behind the trade. His fund made about $1 billion from the housing collapse.

In a recent interview, Eisman was asked “what are the biggest opportunities you see today?”

He said “the disruptor vs. disruptee theme. [It] will last for a long time and there’s lots of way to play that...”

As you may know, many investors got rich by specializing in one strategy.

Carl Icahn is an “activist” investor. He buys big chunks of companies and influences CEOs to make changes.

Neither Druck nor Eisman specialize. Instead, they seek out moneymaking opportunities like bloodhounds.

Druck has famously made big money across all assets: stocks… bonds… currencies.

Eisman made his fortune during the worst market crash since the Great Depression.

You could say they’re agnostic in what they buy.

It’s like when bank robber Willie Sutton was asked why he robbed banks? He answered “because that’s where the money is.”

Go where the money is.

In a recent interview Druckenmiller said “We’re in the most economically disruptive period since the 1880s.”

Clearly, these guys know the big money today is in disruptor stocks.

I like to see two of the world’s smartest money managers on our side, buying disruptors along with us.

That’s all for today. Be sure to check out next week’s issue. I’ll be making an important announcement…

Plus I’ll make the case for why one of the world’s largest companies—whose stock you almost certainly own—is in big trouble.

Write me at stephen@riskhedge.com with any questions or comments.

In response to my article about Waymo’s self-driving cars, RiskHedge reader Syd asks:

Which Google shares do you recommend, Class A (GOOGL) or Class C (GOOG)? What's the difference, other than a small difference in price?”

Syd, the difference is Class C shares (GOOG) have no voting rights, while Class A shares (GOOGL) have one vote each.

For this reason, GOOGL trades at a slight premium to GOOG. But the two move in tandem. For example, since the stock split in April 2014, the correlation between GOOG and GOOGL has been 0.9988. 1.0 is a perfect correlation. So you can go ahead and buy either one.

RiskHedge reader Jim has some good thoughts on self-driving cars.

“I read the RiskHedge report on AI and self-driving cars. I probably wouldn't climb in one today, but in a few years, I'm not sure I'd have a problem with it.

I realize that self-driving cars have a lot more sensors and computational power than the average vehicle. I love the driver-assist package in my wife's 2014 Jeep Cherokee. I don't think I'll ever own anything without adaptive cruise control again. Really helps for those "not so good" drivers who pass you then pull in front and slow down.

Nice thing about self-driving cars is the millions of senior drivers who should no longer be driving can stay more independent. As someone nearing 65, I know I'll be there one day. If the self-drivers aren't there, I hope I have the sense to give up my car, as my grandmother did... first stopping driving at night, then giving up her license at around 89. She lived several more years and despite living in a country village, never missed her car.”

Jim, I completely agree. Elderly folks who can’t drive will be the first big winners when self-driving cars rollout. They’ll no longer have to take public transport to get groceries or visit family.

This is why Waymo is smart partnering with city councils to fill the gaps in their public transport systems. And bringing people to buy their groceries at Walmart.

On the face of it, self-driving cars seem like a young person’s thing. But in a few years, Americans of all ages will be riding in them.

2 ways to profit from “America’s Great Divide”
Where are the stock market leaders?
How I saved $1,344 with two phone calls